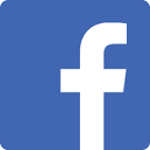 A big thank you to all the families that have supported the Lakewood Lakers (formerly CO JR Eagles) since 2003.

The Lakers competed in their final season and will be closing operations in 2022.  We look forward to seeing all our members at the rinks.

The Lakewood Lakers and Colorado Avalanche are proud top announce a Learn to Play hockey program for kids ages 4-10.

Open to all kids looking to learn to play.  The program consists of 6 hours of ice time, coaching by Lakers staff, full set of new equipment for $229.  Please click the link below to be taken to the registration page.

Player registration for the Lakewood Lakers 21-22 season is now open.  Please click the link below to register you player.

Congratulations to the Lakers Squirt White for winning the CRHL Championship in dramatic fashion.  It took a full overtime then a shoot-out for the Lakers to get the banner.

Lakers Squirt B Red are the Frightfest "A" Division Champions

Congratulations to the Lakers Squirt Red team for taking the Championship at the Foothills Frightfest Tournament over Halloween Weekend.

Congratulations to the Pee Wee Red teams for taking the Championship at the Foothills Frightfest Tournament over Halloween Weekend.

The Lakewood Lakers Under 8 "Little Lakers" program is scheduled to being on Friday October 2.

The Little Lakers players will receive 3 hours of ice time every week.  All practices and games will be on Friday's/Saturday's/Sunday's 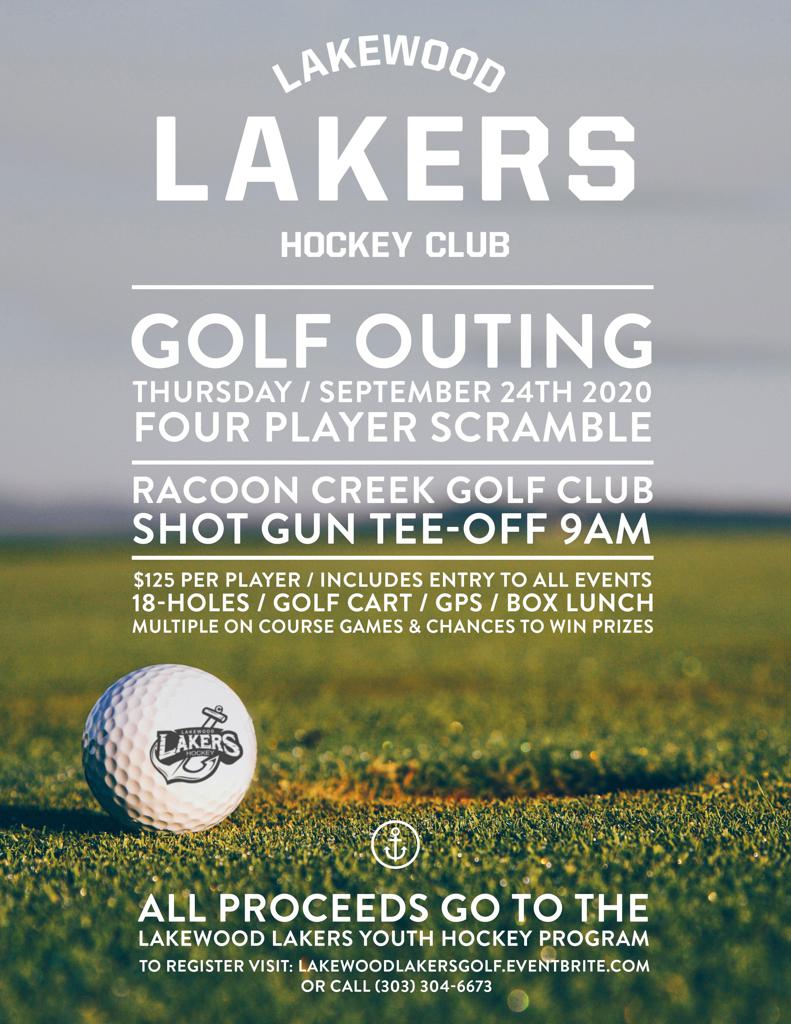 The Lakewood Lakers will be hosting a fundraiser Golf Tournament on Thursday September 24 @ Raccoon Creek Golf Course in Littleton.  The event flyer is below.  Registration for the event can be done by clicking HERE

Player registration for the 2020-2021 Lakers Season is now open.

Please click HERE to be taken to the player registration page. 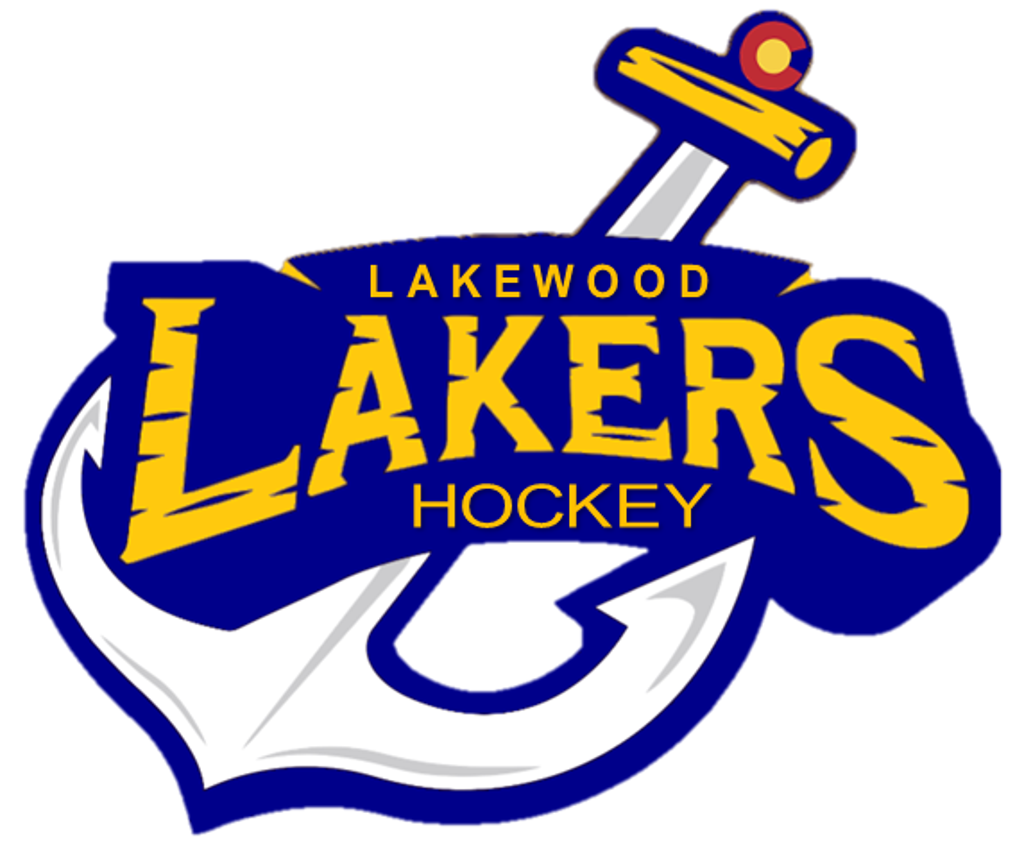 I regret to inform you that Spring Lakers Hockey has been put on hold for the time being and there will be no skates until further notice.

With constant contact, players using water bottles and the volume of concern with the sickness in general we have made the decision to freeze the process and follow recommended safety and health procedures.

We hope to have more information by the weeks end to tell everyone how we will be moving forward with the Lakewood Lakers Spring/Summer hockey program.

Thank you all for your understanding, we only want to protect the longevity of our players and staff. Please call, text or email me if you have any questions or concerns. 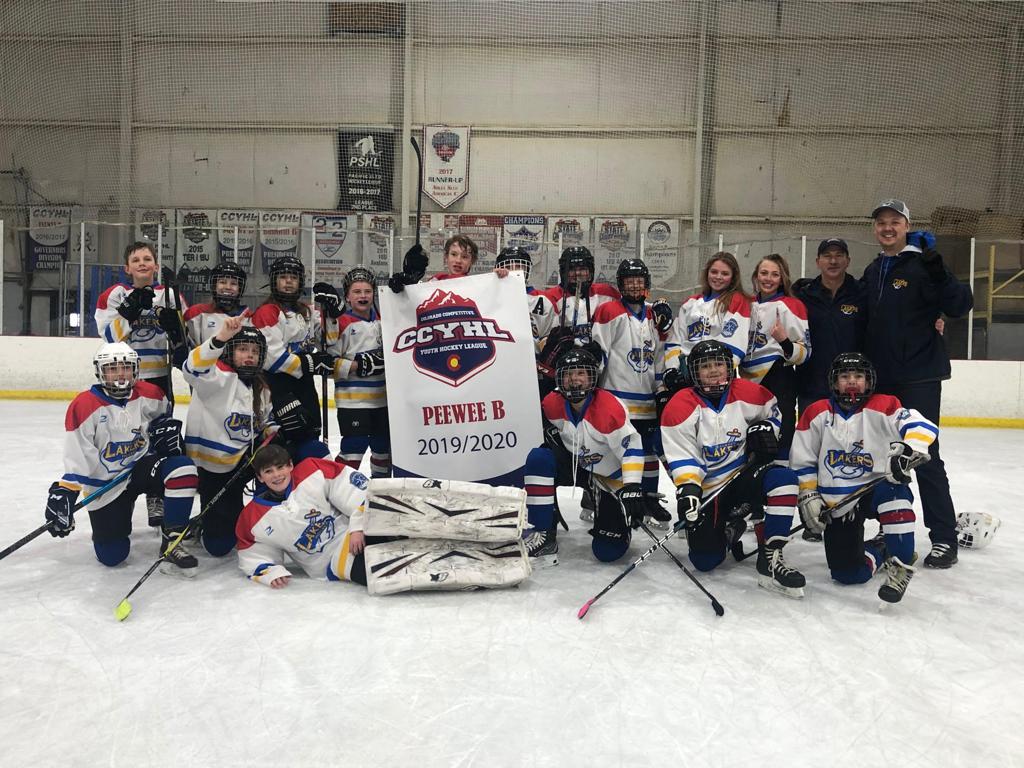 The Lakewood Lakers are proud to be a sponsor once again of the Colorado Avalanche Mile High Mite Learn to Play Hockey Program.  The program begins September 6 and offers 6 hours of on-ice instruction.  To view the registration flyer and full schedule please click on the below link.

Lakewood Lakers Hockey for the 2019-2020 season gets underway the weekend of August 24.

Bantam and Pee Wee age groups will begin skills practices on the weekend of August 24.

Squirt players will being skills practices the first weekend of September after Labor Day.

U8 Little Lakers will begin the first weekend of October.

Great things to come for the Lakers this Season.  Be a part of the Lakers family and lets have a great year.

Lakewood Lakers Hockey Director Chris Gassman will assume the role of U8 Director for the 2019-2020 Season.  Chris will be taking over for George Wolff, who has been the Little Lakers U8 Director for the past few seasons.  George and his family are relocating to Montana.  Coach Wolff will be missed as he was a fantastic coach and Director for the Lakers.

Lakers Director Chris Gassman has been with the Lakers (formerly CO Jr Eagles) since their inception back in 2003.  He has coached teams at every age level during the past 15 years.

The Lakers are excited to have Chris as the U8 Director this season and we look forward to a great 2019-2020 Hockey Season.

The Lakewood Lakers will open registration for the 2019-2020 Season on May 15 with an early registration discounted fee for Squirt/PeeWee/Bantam players.

The link for registration will be posted on May 15.

Information on the program can be found on the flyer below.

The Lakewood Lakers have partnered with the Colorado Avalanche to be a host association for the Mile High Mites Learn to Play Hockey Program.

The program is for kids born between 2009-2013 that are interested in trying out hockey.

Registration is now open for the 2018-2019 Lakewood Lakers Season.  Please visit the "Registration" tab to complete the registration

Please visit the "Coaches" tab to view the full list

Starting June 14 & 15 the Summer Program for the Lakewood Lakers will begin.  The full schedule is posted on our calendar.

The program will consist of 2 hours per week on ice along with an off-ice training session.

The below flyer has all the information.

The Lakers 2018 Spring Program gets underway April 3 and runs through the end of May.  The program consists of 2 hours of in ice instruction per week with some potential games later in the spring.

The cost for the program is $250 per player.  Below are links to the informational flyer and the schedule.

Jr Eagles to Re-Brand as the Lakewood Lakers Spring 2018

It comes with great excitement that the Jr Eagles announce our re-brand.

Beginning in the Spring of 2018 the Jr Eagles will become the Lakewood Lakers.  We are extremely excited about this re-brand as we are planning on this new image to help us continue to grow our competitive program in the metro Denver area by connecting with our Lakewood community.

More news to come for the Lakers Spring & Summer Programs.

The team qualified by reaching the finals of the Westminster regional tournament in February.

We will be starting our U8 program Friday October 6.  The program this year will offer 3 different options for families.

Option 1 will be a Friday night ice time

Option 2 will be a weekend ice time

Option 3 will be both Friday and weekend ice time.

Option 1 and Option 2 will be 1 hour a week for $200.  The season will run from October-February.

The kids will also be playing scrimmage games with other local programs and will attend a few jamboree events during the season.

I am getting our registration system updated with the different options.  Please use the below link to register your player for the program if you have not already.

George brings over 15 years coaching experience to the Jr Eagles.  George has operate his own Powerskating & Stickhandling camps since 1999.  Coach Wolff has coached teams at every age level and brings a great skill set to the Jr Eagles.

The Jr Eagles are very happy to add Coach Wolff to the program.

Practices begin Friday October 6 for the Jr Eagles Under 8 program.  The program will offer a few different options for kids Under 8.  The program will consist of Friday nights and Sunday nights practices.  More details to come.  Players can register on the "registration" tab

The Jr Eagles will begin their 2017-2018 Season the weekend of August 18 with CPHL Columbine and Bantam teams skating.  Pee Wee's will begin August 26 and Squirt will start up September 8.  The Full August Schedule is posted on the website

The Jr Eagles are now accepting registrations for the 2017-2018.  Please click on the "Registration" tab on the menu bar.

The Jr Eagles have been approved by the Colorado Competitive Youth Hockey League (CCYHL) to compete beginning this coming 2017-2018 season.  This is a great opportunity for the program to continue to grow and compete against the rest of the great programs in the metro Denver area.  The Jr Eagles Squirt/Pee Wee/Bantam teams will join the CCYHL.

The full September schedule will be released once completed.

The Squirt team faced a tough opponent in Summit County.  The game was back and for with Summit coming out on top.  The Squirt players battled hard and same up 1 shot short, but they had a great season.

The Pee Wee White team had possibly the most exciting semi-final game of all time.  The team faced off with Hyland Hills Orange.  The team fought back and forth and entered over time tied 0-0.  Neither team could punch in the winner during the 3 on 3 over time period.  Finally after 5 rounds of a shoot out, the Eagles fell to Hyland.  Regardless of ths loss the kids have a great memory of one fantastic game.

The Pee Wee Red team entered the DNHL playoffs as the #1 seed with a record of 19-0.  The team faced 2 tough opponents in NCYH in the semi-finals then Hyland Hills Black in the finals.   The Eagles held off both opponents and became the first team to complete the perfect season for the Jr Eagles by finishing a perfect 21 wins 0 losses.

The Bantam Red team also entered the DNHL playoffs as the #1 seed with an impressive 15-1-1 record.  The team came out on fire winning the semi-final game 6-1 against Hyland Hills.  Then in the Championship completed their Championship run by winning by a margin of 7-0 against NCYH.

Congratulations to all the Jr Eagles DNHL teams for a fantastic season. 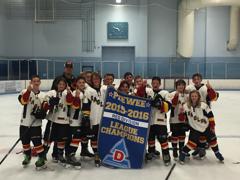 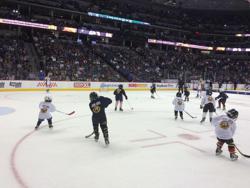 September 22 the Jr Eagles experienced skating like the Pro's 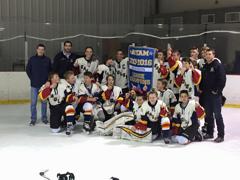 The Lakewood Lakers have partnered with the Colorado Avalanche to be a host sponsor for the Mile High Mites Learn to Play Hockey Program.

The program is for kids born between 2009-2013 who want to try out hockey.  All kids receive a full set of equipment along with 6 hours of ice time.

For registration info please visit the link below.